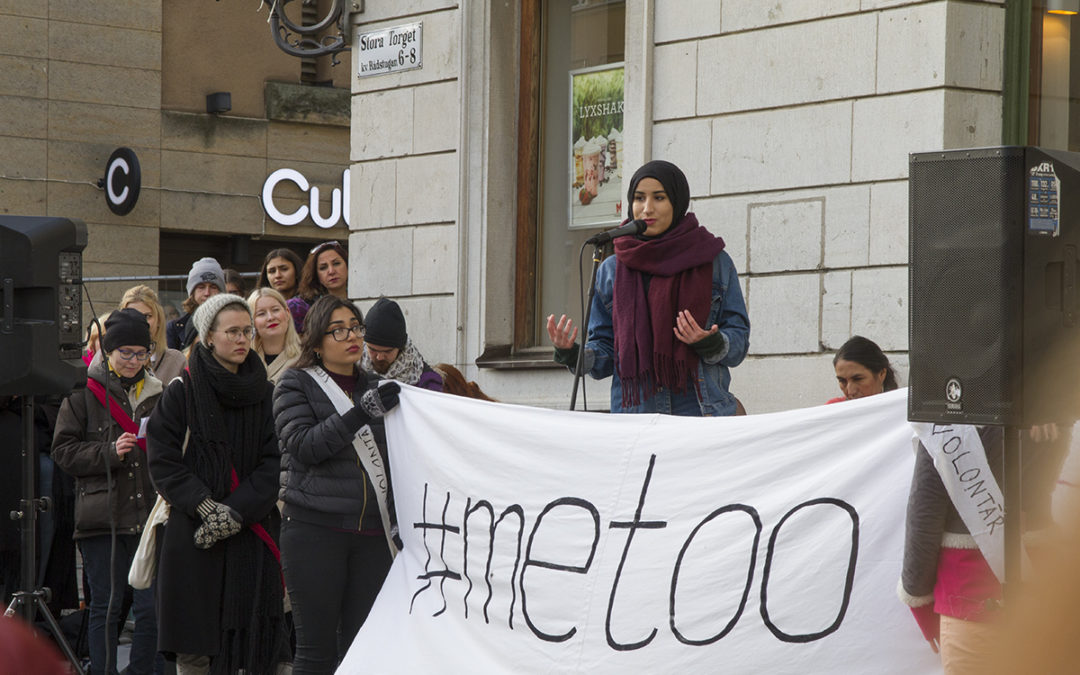 Within a week of the start of the global #MeToo online campaign, manifestations were organized in 13 cities across Sweden on 22 October 2017, from Umeå in the north to Malmö in the south, from the capital of Stockholm to Visby on the island of Gotland. Thousands of people, mostly women, took to the streets to protest against various forms of sexual harassment and assault. The manifestations and the #MeToo campaign were also covered by print and broadcast media, featured in news broadcasts as well as debate programs. The campaign gained further momentum over the following weeks as various sectors made public statements about the ubiquity of sexual harassment, signed by thousands of professionals, from the culture and media sectors to law, politics and academia. By end November, at least 30 calls were published, based on testimonies gathered through social media and email.

The Nordic Museum launched an online campaign to capture stories from the general public immediately after the manifestations, an initiative that was highlighted by Swedish media. The museum used the site www.minnen.se (memories) to collect stories: “Have you posted or shared something in social media in conjunction with the campaign #MeToo? Have you participated in any manifestation on the topic, for example where you live? Help the Nordic Museum to document the campaign. Share your experience of it and how you have participated or contributed.” By end-November, over 100 stories had been submitted, 59 of which were public.

The #MeToo stories on www.minnen.se are mainly textual, with few images, mostly photographs of manifestations, but also some visualizations of the campaign, including images of table cloths embroidered with the Me Too slogan by one of the story submitters (see figures below).

The absence of images is quite understandable, since the stories share experiences of sexual harassment and violation, stories that cannot be shown, stories that have barely been spoken. The stories are testimonies of sexual abuse, from plump sexist comments to violent rape. Many stories also assert the importance of the MeToo campaign, underlining the significance of activism and empathy.

Even so, there is something to be said for how text is displayed as images in the #MeToo campaign, while the whole campaign is about visualizing the invisible, thus breaking a culture of silence.

In the MeTooSweden Instagram account, images range from photographs and short video clips to screenshots and text. To date, the account has over 1,800 followers and over 80 posts. Early photos and videos depict the manifestation in Stockholm, with video statements encouraging people to participate and video greetings encouraging people to keep up the work after the demonstration. Photos also depict individuals who support the campaign, often with the #METOOSWEDEN slogan added to images with portraits of men and women. There are many screenshots, capturing media coverage from social media as well as print and broadcast media, often combining images and text. Screenshots are also posted to capture details of the campaign, such as lists of people and groups to contact , as well as public statements by law practitioners (Juristuppropet #medvilkenrätt) and singers (#Visjungerut-uppropet), and more recently a list of all statements so far.

The popularity of Instagram in the MeTooSweden campaign is comparable with an earlier campaign, Svart Kvinna (Black Woman) in 2014. Fanna Ndow Norrby set up the Instagram page @SvartKvinna to highlight experiences of sexualized, exoticized and racist practices, and the racist structures and objectification that black women encounter in Sweden. The next morning the page had 10,000 followers and in the following months Fanna received hundreds of stories, which were read and discussed by 40,000 people on the Instagram page. Similarly to MeToo, Svart Kvinna visualized stories of racial discrimination through images with written testimonies. Fanna was overwhelmed by the response, noting. “An Instagram account became so much bigger than I could ever have imagined, It shows what an enormous need there is to air, talk, discuss and fight racism against black people” (Ndow Norrby 2015: 12). While the Instagram page remains online, with over 33,000 followers, many of the stories have also been published in the book Svart Kvinna (Ndow Norrby 2015).

This combination of texts and images underline the growing significance of visual communication in social media. Scholars have noted the multifaceted uses of mobile phone cameras and online sharing in everyday photography, including mobile photography (Gómez Cruz & Lehmuskallio 2016, Uimonen 2016), as well as the ubiquity of images in digital media practices and the embeddedness of digital images in spatial networks and relations (Favero 2014). This convergence of digital and visual culture, as manifested in online visual communication, points to new forms of mediated sociality. Recent research has ascertained how “Instagram creates new expressions of social connections and visual communication “(Serafinelli 2017: 92). The practice of photo-sharing exemplifies mediated visualities as “social connectors,” with photographs functioning as social connection points (Ibid: 109). As discussed here, it is not just photographs but images of various kinds that function as social connectors, thus illustrating the social significance of visual communication in social media.

When it comes to social activism, the #MeToo campaign illustrates the power of digitally mediated visual communication. Hashtags in combination with images offer powerful rallying cries, as exemplified by various social movements in recent years, from the so called Arab Spring to Black Lives Matter. These movements have shown the extent to which social media can be used to mobilize social protest in different parts of the world. While social media helps connect people for a common cause, experience has also shown that online advocacy needs to be combined with offline activism if the campaign is to have an effect, along with more traditional media coverage.

Young media-savvy women like Felicia Wittenberg are making sure that the Me Too campaign continues to gain momentum. In an interview on 15 November, Felicia told me how she got involved in the campaign. The day after the start of the MeToo campaign in the United States on 15 October, Felicia noticed that some 70-80 % of her Facebook feed consisted of MeToo stories and hashtags. When she became aware of the manifestations planned for 22 October she joined a chat group and was quickly invited to organize an event in Visby, where she works part-time. Within 90 hours, Felicia managed to organize the event, including securing the required police permit and the collaboration of local organizations for women (Kvinnojouren) and men (Mansforum). She relied on social media, especially a Facebook event page for ME TOO Visby on 22 October 2017, which attracted 113 interested and 66 people who signed up to attend. According to media, 80 people attended the Visby event, which lasted for 2,5 hours, despite windy weather. Felicia invited a friend who is a photo journalist to document the event. 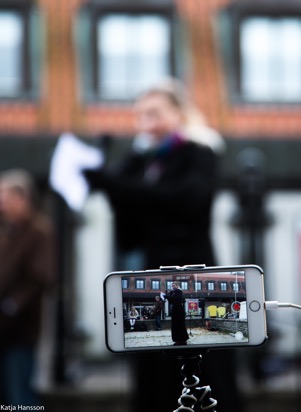 While applying the “ladies first principle,” Felicia used an inclusionary approach for the Visby manifestation, stressing that sexual harassment is a “human” issue, not just a “woman” issue. Felicia knows that women suffer from sexual harassment much more than men do and cited statistics showing that 96-98% of perpetrators of sexual violence are men. Even so, aware of a highly “polarised political sphere” in Sweden and the western world at large, Felicia insisted on including all genders in the manifestation, underlining “togetherness” (gemenskap), while refuting the polarising tendency among some campaigners to include women only. Emphasising empathy, Felicia recognized that men who have been victimized are better able to relate to women’s experiences of sexual abuse, while noting that many sensible men need to become more aware of sexual harassment, thus her speech focused on “notallmen.” While recognizing the strength of the words “MeToo,” she suggested that the manifestations came so quickly in Sweden because of a latent need for social advocacy: “we have been waiting for an opportunity to express that side of our polarisation: we want to stand together, we don’t accept this anymore, we want to fight and protest.”

In Sweden, the MeToo campaign is getting stronger by the week, with continued online activism and media coverage, as well as resignations by powerful individuals, following testimonies that have visualized their sexually abusive behaviour. Most of the publicly exposed perpetrators of sexual harassment have been male, typically in positions of power, but one female media person has also resigned. These resignations constitute tangible effects of the MeToo campaign, but the less tangible effects of the campaign remain to be seen, not least the courage mustered by victims of sexual harassment to speak up and growing popular awareness of how widespread the problem is. On 22 November 2017, a month after the manifestation in Visby, Felicia posted a message on her Facebook page, “So how do we move forward with the #metoo-thing, Felicia? Like this 🙂 :” followed by a list of the 30 public calls of various sectors in Sweden. The list keeps growing.