Reflections from the Helsinki Photomedia Conference

At the turn of March and April the project team participated in the third biannual Helsinki Photomedia research conference organized by Aalto University, School of Arts, Media, and Design in Helsinki. Under the theme Photographic Agencies and Materialities the conference program included a broad selection of topics from many fields of research with different approaches on photography.

In this blogpost we briefly reflect upon the most interesting presentations and papers we came across during the three conference days, which are relevant for the theme of our project: Collecting the Digital: From a Photographic Perspective.

A major reflection made right after the conference is that there is an imminent need for, and interest in the project. A lot of research has been done on the subject of mediation, sharing, practices, and affordances of digital photography, though most of the research lacks a memory or history perspective. The following sessions we found were especially relevant to our project. 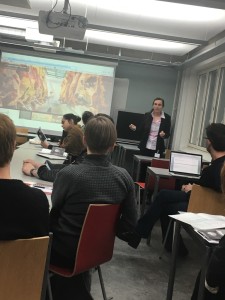 Panel: Empirical Studies on Material Visual Practices in the Domain of Digital Photography.

Mette Kia Krabbe Meyer (The Royal Library, DK) also reflected on this during the second day of the conference in her paper Even Closer, Photographic Indexicality in a Digital Age when she spoke of the tactile needs we human beings have, manifested in the gesture of stroking the cheek of a loved one’s image on a screen. It gives us a sense of how the skin of the cheek actually feels, although being well aware that we’re just touching glass. She is also exploring the relationship between the actual physical photograph, and it’s digital representation.

In this session Elisa Serafinelli (University of Central Lancaster, UK) gave a presentation on Mediation – Mobility – Visuality, Visual Practices in the Digital Age. One of her most important points, from a museum point of view is the fact that collecting in the digital age requires qualitative mixed research methods, for example netnography, computer-mediated interviews and visual content analysis. She also delivered a paper in a different session which we will comment upon further down.

Edgar Gómez Cruz (Universitat Oberta de Catalunya) talked about the photograph as an assemblage. This assemblage has been destabilized by digital technology, and we need to be aware that new assemblages are being shaped. Perhaps the most interesting aspect of photography that Edgar Gómez Cruz and other presenters discussed is that photography is not a fixed thing. And as Liz Wells put it in her keynote presentation: ”There is absolutely nothing static about reading photographs”.

Among the interesting  presentations during the conference was Elisa Serafinelli’s paper Smart Technologies, New Materialism and the Creation of New Mobile Visualities. Instagram as a Case Study.

Serafinelli had studied the relationships between mediation, mobility and visuality by using qualitative mixed research methods, netnography, computer-mediated interviews and visual analysis. She states, that her ”[f]indings show that people modify the way they see photographically. New forms of visual representation emerge thanks to the mobility of new technologies. Elements of innovation, in addition to social media platforms, are identified in the various practices and motivations that involve the practice of photo sharing.”

Serafinelli’s research also confirms the initial supposition that individuals using smart mobile technologies give more importance to the act of producing multimedia contents more than the content itself. Her findings show that the possibility to photograph all the time with the ever-present mobile devices have transformed the way informants experience and use photographs but also how they experience their surroundings. Interestingly, Serafinelli described, that during interviews the interviewees tended to focus more on the ways they use and share their photographs rather than the visual content of the actual images: they were talking more about what pushed them to make the photos and post them in Instagram than analysing the images as such.

We attended the workshop: Approaching Photography on Social Media. The intention of the workshop was to explore the interdisciplinary approaches to the use of photographic images on social media. The workshop was conducted by: Visual Social Media Lab which is situated at the University of Sheffield (UK) (http://visualsocialmedialab.org.) The speakers at the session and co-workers at the lab: Simon Faulkner, Farida Vis, Anne Burns, Francesco D’Orazio, and Lin Proitz all presented different approaches to social media images ranging from art history, sociology, quantitative analysis etc. in the workshop. The work and topic of the project seemed very relevant for our project, and we were reaffirmed that an interdisciplinary method when analysing the practises as well as the images is needed. The Visual Social Media Lab has been searching for approaches that combine quantitative and qualitative methods and had not found any yet. As a result they presented their common research in a case study on the image of Alan Kurdi (the Syrian boy on the beach) which was very interesting – and inspiring. But when asked, the project seems to lack a memory aspect – the focus is very much contemporary. Cooperation could therefore be rewarding and relevant.

The artist Sylvia Grace Borda presented her project “Farm Tableaux”, which consists of three dimensional 360 degree staged photos of modern farming landscapes that can be viewed on Google Street View. Right now Borda cooperates with Finnish agriculture organizations documenting the modern farming life and production through her art. As our project also is about how visualization of the digital born photography, Borda’s use of street view, dimensional photo, and Google Maps adds a new dimension to our work and illustrate ways to give access and share digital born photography in a topographical setting based on maps. The dimensionality also add another dimension and are examples of digital photography, we have not even thought of as a type. For future preservation there might be some problems regarding Street view though.

Jessica Bushey (University of British Columbia) presented her research on the implications of the very complicated juridical terms,which have an influence on what to pass on to the future, in terms of preservation and digital archives of personal images from social media platforms in her paper The Loss of Materiality and its Impact on Digital Estate and Archive. Bushey has conducted interviews asking people about their knowledge and awareness about the terms which their images are controlled by on clouds services and social media.The findings reveal that the user expect an on going access and that the digital images are preserved for the future. At the same time Bushey’s study confirms other studies when it come to the fact the practices focus on communication not memory and preservation.  In a time where Flickr is on sale, Instagram is changing its logarithms,Twitter has already done it, these are important questions and very good to be reminded of. Bushes findings are very important for the #collectingsocialphoto project. The complicated conditions and terms of the firms emphasize the assumption of our project that archives and museum have to collect in a contemporary setting when the images are produced, while people are still alive.

Towards the end of the conference we participated in the round-table discussion Together While Apart? Understanding Mediated Affect and Distributed Agency in Personal Photography moderated by Patricia Prieto-Blanco and Maria Schrieber and one of the issues discussed was how to make a typology or classification of the two billion images uploaded and shared daily. There is no obvious answer but the importance of making qualitative research using ethnographic methods combined with visual analysis was stressed. As a researcher you have to get to know the people you research in order to analyse the reasons why they upload and share images. One interesting question to ask is what is shared, what is not shared and what is deleted? Another issue touched upon was the affordances of different social media platforms and how the platform is decisive of how you photograph and what you choose to upload. These issues all regard methods of research, which we will come back to in a later blogpost about the FutureLearn Mooc Why we post?

Abstracts of the presentations at Helsinki Photo Media Conference:
http://helsinkiphotomedia.aalto.fi/ocs/index.php/hpm/hpm2016/schedConf/presentations?searchInitial=B&track=