”I’m not stalking, I just find you really interesting”

The Finnish Museum of Photography has made good progress with its two case studies: Prehistory of Visual Social Media and Social Media Diaries.

What have we learned so far? First, people truly enjoy nostalgizing, and photographs are a very natural way to do that. Second, it is easy to attract people’s interest, but quite challenging to get them involved.

Social media is so much about being interesting. We could even jokingly ask the following: if your post or photograph isn’t interesting, is it social media at all? Who decides what is interesting? Being interested is indeed a consequence of communicating. Simply put, it’s like there’s one person on stage and another person looking and, perhaps, admiring, wondering, or even loathing – but these are all forms of interest. If you’re giving it your attention, it is interesting, despite liking it or not. If we go even more into details, the words “social media” cannot be used if there’s no communication. The word “media” itself comes from “being a medium”, being in the middle of something.

Enough with the philosophy. I’m not saying that social media and getting attention is a bad thing. Instead, I think it’s healthy to be curious about other people. Being curious is the first step to understanding each other.

The thing is, when we nostalgize (and romantize) our past these days, we can often recognize even strong relationships towards photos and people we don’t know but still kind of know. They are people we follow or used to follow; they are people who sneakily affected us and how we understand each other and read each other. They affect the norms. We easily ”stalk” each other. Stalking is also about seeing photographs, and the more we browse and see photographs the ”better” our taste gets. This is directly in connection becoming better at photographing and self-expression. In this light it doesn’t seem weird at all that the stereotypical Instagram imagery is often very high in quality.

In June FMP organized a public event on IRC-Galleria, “the Finnish Facebook” or ”the social media before social media”. It’s a platform from early 2000’s that people basically left after the real Facebook stepped in, but the website still exists. Of course, we made a Facebook event for this IRC-Galleria evening. (Quite ironic!) Without any marketing really, people found the event immediately and soon there were “250 people coming” and “2500+ interested”. This was a great sign of some sort of need.

We ended up with more than 100 guests, enough to have the room overflowing with people. The social aspect of this imagery is still very much alive, it seems. We were showing photographs from IRC-Galleria and talking about them together. We were talking about the way people expressed themselves, about what was ”normal”, about what are the phenomena we remember the best. I have to say, the atmosphere was quite magical. These people didn’t know each other, but the feeling of a community and collective memory was very strong – despite the fact only a few people in the room still actively log in on the website. “Those times were incredible. I’m so glad we were there when it happened.” In many ways IRC-Galleria is considered the highest form of pure and authentic social media presence. 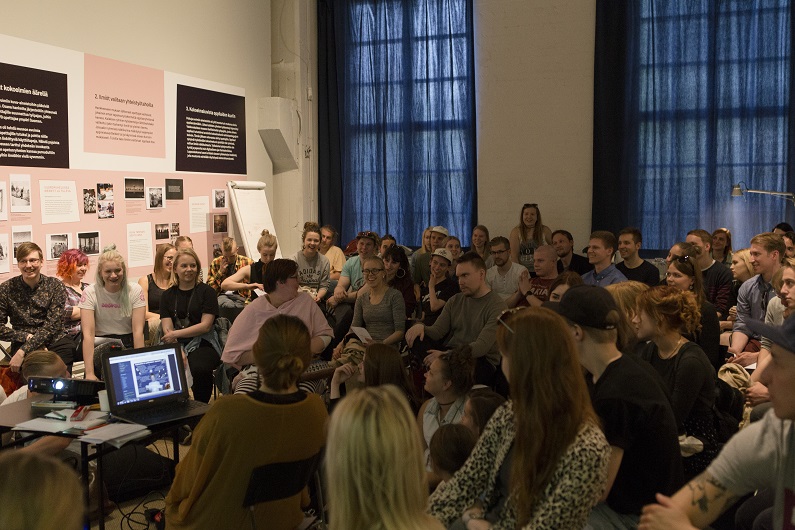 We have had some more interviews. There’s a 24-year-old girl who was really well-known in IRC-Galleria 10 years ago, and a 36-year old man and media educator who has invented a learning method for using cameras instead of pens. One of the founders of IRC-Galleria told us that there are approximately 40,000 “IRC-Galleria babies”. A 20-something local man who is collecting photos from IRC-Galleria in his blog and Instagram thinks that the most common photo types in IRC-Galleria in early 2000’s were dogs, cats, tattoos, emos, military, celebrities and flirt. These are still quite relevant today.

So the first case study, Prehistory of Visual Social Media, is largely done. However, we are still collecting IRC-Galleria photographs for the rest of the year. There are 47 of them so far. In August we’ll execute the main task of Social Media Diaries. There are two active users of social media that we’ll follow for two days – one well-known YouTuber and a local student of beauty and cosmetics. After recording and saving all the photos and videos they shared in social media on those two days, we will meet them once more and, using photo elicitation, talk about their photographs.

A while ago we got this idea that it would be great, as a follow-up of the second case study, to follow two old active users as well. It is indeed important to remember that social media isn’t only used by young (female) users. Anyhow, right now we’ll just keep following, stalking, being interested in all these great people, and hoping to document and save their photographs. What a time to be alive.