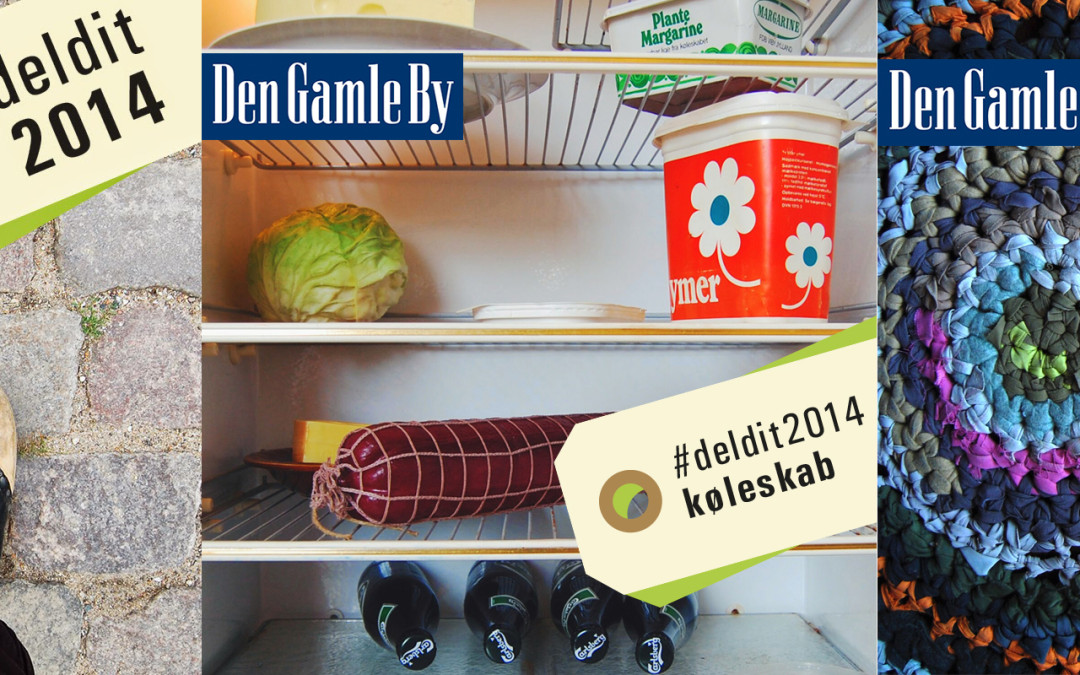 Den Gamle By has in two projects experimented with the picture sharing app Instagram as a documentation tool. In the following, some of our learnings from these experiments will be described. 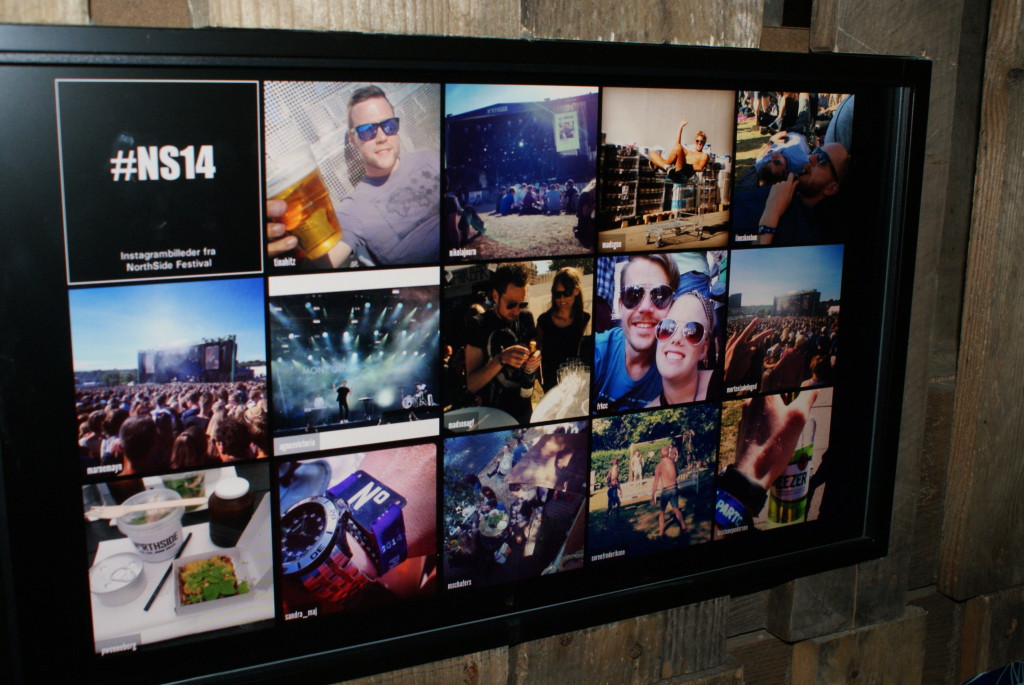 Aarhus is known for the rhythmic music scene – especially in the 80s – and therefore we planned to document and make an exhibition about music. Not much research has been done on the contemporary music scene so we pretty much had to start from scratch. Social media were from the beginning discussed as a methodological tool to use. Facebook as a method to reach informants, inform about the project and ping-pong about ideas for the exhibition and Instagram as a user driven documentation tool. 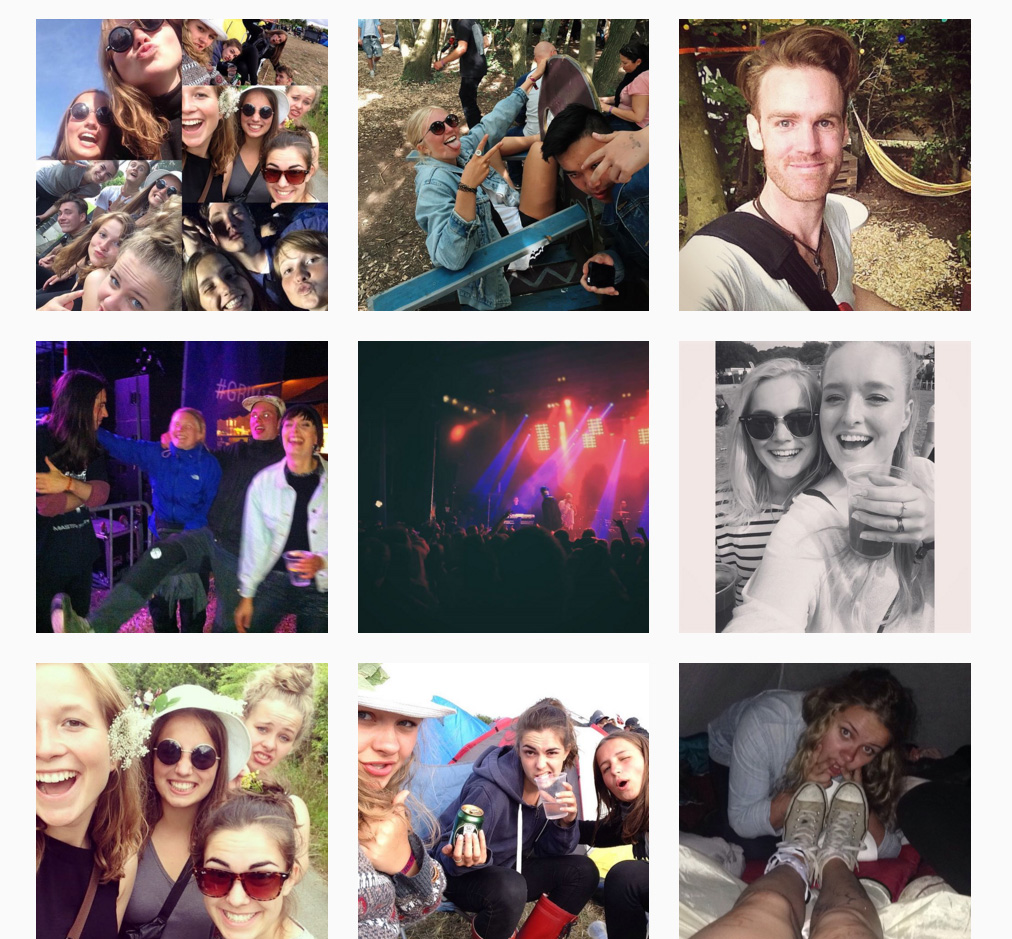 Examples of images tagged with #GRIM14, the official hashtag for Grim Festival 2014.

In our research we saw that not only in Aarhus but national more and more music festivals were arising, and all of them were well visited. We therefore decided to collaborate with three music Festivals in Aarhus – Spot Festival, NorthSide and Danmarks Grimmeste Festival – that all had an Instagram strategy. We were official partners and promoted in collaboration the official hashtag of the festivals. More than 35.000 pictures were uploaded over 2 years on Instagram using the official hashtags. A huge amount of material that we never could have collected ourselves. And except for the context of the festival there were no involvement in what the users uploaded.

Categorizing and analyzing the material 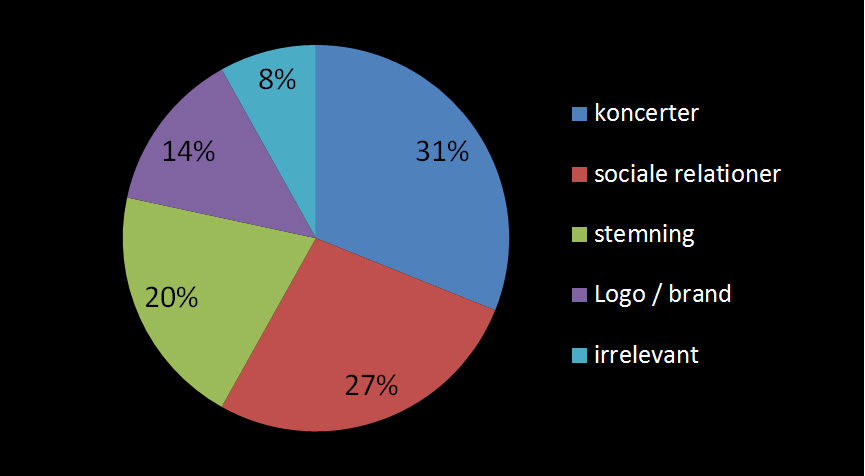 We categorized our material into 5 categories; social relations, brand & logo, concerts, and a fifth category with photos that used the same hashtag but which did not have anything to do with the festivals.

35.000 pictures were more than we could have dreamt of. We decided to analyze the material by categorizing it. Concerts, social relations, atmosphere, logo & brand were the four main categories plus a fifth category we named irrelevant photos. The use of hashtags is anarchistic and the hashtag #NS14 used by the festival Northside is among others also the hashtag used for an Australian football team. One conclusion was that social relations took a lot of space so showing whom you are with is an important statement. Even more important than to show what concert they were experiencing.

The other project is about documenting 2014. In a couple of years we plan to open a 1:1 2014 street. We have collected objects, apartment houses, interviews, sounds etc. Pictures were also on the wish list as a source to illustrate the year 2014. We faced the challenges in choosing what kind of pictures and material to collect and to expand the possible contributors, we again decided to use the social media Instagram that in 2014 was very hyped in Denmark.

A visual identity and a communication strategy were done to get people to share pictures to document the year 2014.

Learning from the project on contemporary music we decided to make up our own hashtags. The main hashtag was #deldit2014 (#shareyour2014) and each week we planned to launch a new hashtag. It was hashtags as share-your-refrigerator, share-your-christmas, share-your-livingroom etc.. The purpose was both to make it easy for users to contribute to a specific topic but also to – already in advance – have the material categorized. The hashtag and the project were promoted through Den Gamle By official Facebook and Instagram profile and the different hashtags gave us the possibility to launch the project several times. We gave them a graphic identity and everything was planned in details. 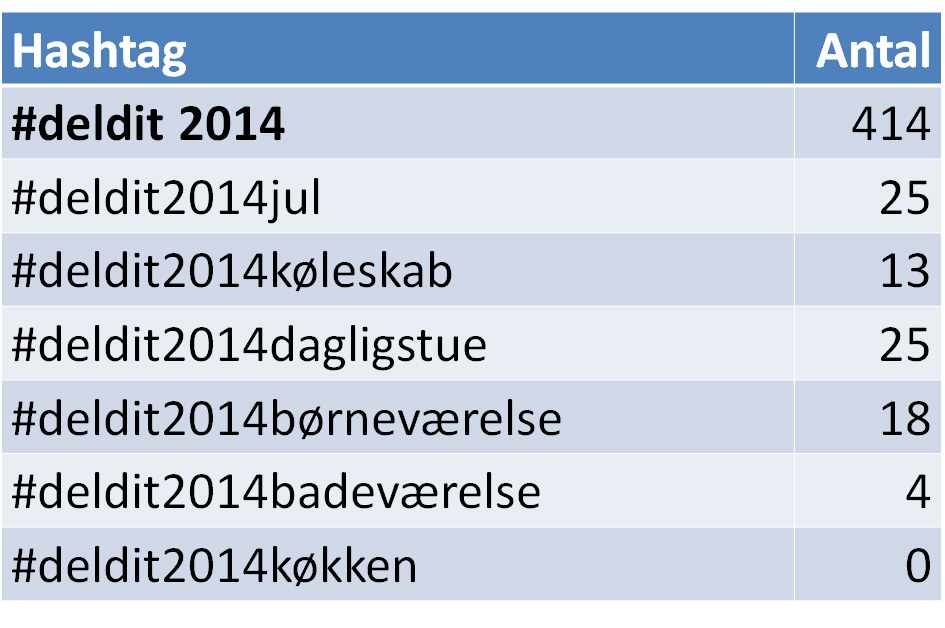 35.000 pictures from the festivals and around 400 from the 2014. A big difference depending on whether we adopted a hashtag or created our own. In 2014-project on the other hand the material was much more precise

Bringing strategy to reality we learned a few things. Promoting our own hashtag to a broad audience needed much more resources than we could establish, even though our communication department was a partner in the project. The defined hashtags and therefore motifs of fx. living room, bathroom, refrigerator were not motifs Instagram users normally would choose. On the other side the people contributing to the hashtag were very much aware that they were a part of a project and therefore it was also much easier to get in dialogue with them.

The amount of the incoming material were, compared to the rock project, little but precise. It gave us documentation from people’s homes in 2014. Without Instagram it would have been difficult to get inside peoples homes. The material has been downloaded and stored until the rebuilt of a 2014-street in a few years.

What have we learned?

Experimenting with Instagram in the two projects has been fruitful and we will do it again. How depends on the project.

In the 2014-street projects users were aware that they contributed to a specific project and acted as we normally call informants. In the rock project only few people knew about our involvement and our use of their pictures so this material is user generated material in a more classic manner.

Users at Instagram always post for an audience so it can be discussed how big a difference it would have made, but due to our learning that the hashtags in the 2014-street were a bit out of place from what people normal post there is a difference to consider.

Common for the two projects is that in using Instagram we got material that we could not have collected ourselves. In neither of our projects Instagram has been the only tool and we don´t think it can be. Other kinds of materials are also needed to make a cultural historical documentation of a theme or a contemporary event.

The main purpose in both projects were documentation. In the rock project we were overwhelmed by the amount of material and it took a lot of resources to analyze afterwards. We ended up exhibiting the material in the exhibition Aarhus rocks. Screens showed pictures from Instagram on the official hashtag of the three festivals, and also the photos from Australia and a local football team. We chose a picture from each of the categories to be implemented in our collections so in fact only four out of more than 35.000 pictures. But the material was used in our research about the specific topic.