Photos taken by a six year old boy, an established photographer and the icons of the app’s ”Snapchat”, ”Facebook”, ”Flickr” and ”Instagram” in which a lot of photographs are spread. How do we choose what to collect?

This summer we finished a project on digitally born photographs in Norwegian museums. The study was conducted in collaboration with six museums in the county of Rogaland, and with financial support from the Arts Council Norway.

The aim of the project was to gain better knowledge about how to plan and collect digital photographs in museums.  The changes of in which photos are used and shared were studied, as well as the status for the Norwegian museum collections. The study included all kinds of photographs taken with a digital camera and preserved as a digital file, from professional photographers’ archives to social photographs taken and shared as part of a conversation between youngsters.

In a historic perspective the use of the photograph has gone through some great changes. Technological development has contributed to making the act of photographing accessible to a greater part of the society, and today almost everybody has access to a digital camera, even though it usually is on their mobile phone, in which the camera is only one of several accessories.  The changing ways of using the photograph are even clearer in the transmission from analog to digital photography, but some tendencies have not changed. Through history the photograph have been used for documentation, communication, entertainment, as memory, for marking of social status and building of identity. 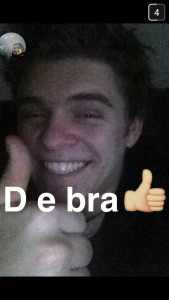 Youngsters use a visual communication in apps like Snapchat. A selfie from 2016. Published in acceptance with the anonymous photographer.

In the digital era the amount of pictures has increased dramatically. The combination of a huge increase in photographers, in situations in which pictures are taken and in the number of pictures taken in each situation makes the work of the museums challenging. We are supposed to preserve, show and study a representative part of society. There is a remarkable decrease in the number of images in the photographic collections of traditional Norwegian museums as we get closer to the digital era. The pictures collected from the last 20 years are not representative for society, and the digital photographs in private homes, on the Internet and in companies are likely not to last for many years. We risk not being able to receive and collect pictures from the last 20 years. It is therefore clear that museums need to act to prevent gaps in the cultural heritage. But how do we choose what to collect and how do we go about collecting digital pictures?

A collection project must be planned in accordance with the mission statement and aims of the museum. Other disciplines in universities might give valuable analysis of the society, and thereby give a clue for deciding what to collect. It might also be beneficial to collaborate with other museums and cultural heritage institutions.

When collecting pictures from present time, it’s important to know and follow ICOM’s Code of Ethics and the national laws. Norwegian jurisdiction regulates the act of collecting, preserving and using information about other people. We also have a law regulating the rights of the photographer and of the persons being photographed. In addition to ICOM’s Code of Ethics these laws have great impact on how and what we can collect and how we use the collected material. 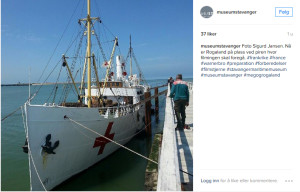 The 87 years old ship M/S Rogaland by a dock in France. Photographer: Sigurd Jansen, 2016. The picture has been shared with Museum Stavanger on Instagram with the hashtag #megogrogaland.

In our project different methods of collecting digital photographs were described. We did not collect pictures, as the aim of the study was to gain knowledge on how to collect. We still would like to gain more knowledge about how to collect through experiences. The museums in the county of Rogaland are therefore planning to collect the experiences from projects in which digitally born pictures are collected by the use of different methods, either by collaboration with a professional photographer or a company, by the museum employees taking pictures or by collecting pictures from a specific group of people. Pictures can be given to the museum on physical devices or sent on e-mail etc., or they can be collected from social media.

Through the project we have put focus on the importance of collecting photographs from the present. As more colleagues gain awareness of this I think the number of digitally born pictures in the museums will increase. Through studies like this, and the in-depth project Collecting Social Photography, as well as experiences from collection projects, cultural heritage institutions will be able to collect, preserve, present and study photographs from a more representative part of our society. This will help cultural heritage institutions to take an active, relevant and important part in social discussions. Collecting Social Photography will give important knowledge for the cultural heritage institutions to be relevant in society, and I’m looking forwards to following the next phase of the project.

The report from the project Collecting Digitally Born Photographs is available in Norwegian from Haugalandmuseene.no (see Publications).